$25 for AYP Members
$35 for prospective members
*Must purchase a ticket in advance to secure your spot. Refunds are not available after Monday, Dec. 6* 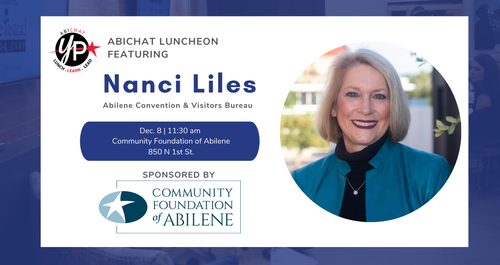 Join AYP for ABICHAT! A luncheon series that occurs once a quarter for Abilene Young Professionals. Hear from community leaders in an intimate setting as they share their stories of how they made their mark and how others can do the same. Tickets available to 60 young professionals and are first come, first served and are nonrefundable. Our last series for 2021 sponsored by the Community Foundation of Abilene, will feature Executive Director for the Abilene Convention & Visitors Bureau (CVB), Nanci Liles. Nanci has led the Chamber's CVB for 36 years and is a well-known name regarding destination marketing in the state of Texas. At this luncheon, we'll hear how Nanci got started in her career, challenges she may have faced, and how tourism is essential to Abilene's economy.

ABOUT OUR SPEAKER:
Nanci Liles: Nanci began her destination marketing career in 1982 at the Midland Chamber of Commerce. She has passionately served the ACVB as director since 1985. Throughout her 40-year career, Nanci has been actively involved in the Texas tourism industry. She served on the Texas Hotel and Lodging Association’s Legal Defense Committee, as director and Chair of the Texas Association of Convention and Visitor Bureaus (TACVB) and as Chair of the Texas Travel Alliance (TTA).

Nanci’s term as TTA Chair, an association near and dear to her, began Sept. 11, 2001. From that day forward, members of the TTA community became more resilient, more unified, and (under her leadership and many like her) the travel industry not only survived but thrived. Her work TTA also opened many doors for the Abilene community through Nanci’s service alongside senior leadership of Texas businesses including Landry’s, American Airlines, the Dallas Cowboys, SeaWorld, Six Flags Over Texas, and more.

In 2008, Nanci received the TTA’s prestigious “Tall in Texas” and in 2016, she was presented with the alliance’s Lifetime Achievement Award. The Texas Department of Transportation Tourism Division bestowed the Gene Phillips Hospitality Award to Nanci in 2017.

Nanci was one of the first tourism professionals to be certified as a Texas Destination Marketer through the TACVB. She was named as one of the Top 20 over 50 in Abilene (first edition – 2011) and was honored an Outstanding Woman by AAUW.

Nanci moved to Abilene in 1985 with the thought that the move would simply be a steppingstone in her career, however, it turned out to be so much more. She found herself fully engaged and in love with the Abilene community.

“I have had the pleasure to work with so many wonderful board members over the years,” said Nanci. “The leadership, talent and engagement make the ACVB board the best in the world. For 36 years and counting, the ACVB has always had a quorum—this is a testament to their commitment to the travel and tourism industry in Abilene.”

The ACVB is very successful in promoting the city for groups, conventions, sports and leisure. as can be seen through the economic impact travel has on Abilene’s economy annually.

“It takes a village,” said Nanci. “Our success goes to the associates (my work family) and their commitment to our mission; having tourism assets; and leadership. I am so very thankful for the opportunity the Abilene Chamber gave me over 36 years ago.”

As Nanci begins her next chapter, she looks forward to spending more time with her new granddaughter, Magdalina Chere, traveling, advocating to end Alzheimer’s, staying involved with the TTA, and being Abilene’s number one advocate.