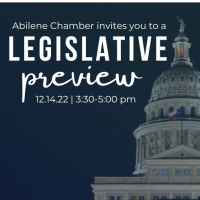 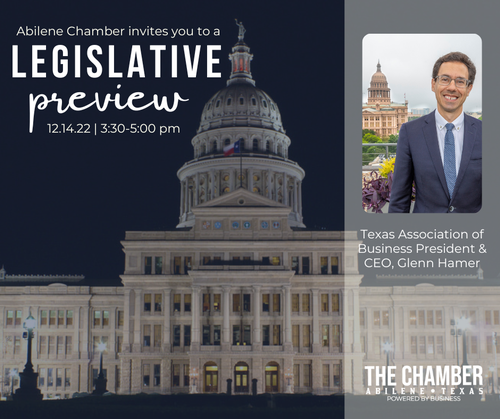 The Abilene Chamber of Commerce invites you to a Legislative Preview with Texas Association of Business President & CEO, Glenn Hamer.

Glenn will share what he views will be key takeaways for the 88th Texas Legislature in a fireside chat setting. Additionally, the Abilene Chamber will unveil its top priorities ahead of session.

Light refreshments will be provided.

ABOUT GLENN:
A torchbearer for the business community, Glenn Hamer has a proven track record for success in the public policy arena. He testified before the 87th Legislature, second day on the job, and made meaningful contributions to the passage of top legislative priorities for the business community (including broadband expansion, “Keep Texas Trucking,” pandemic liability protections, and preventing astronomical increases in Unemployment Insurance).

Since the pandemic, Glenn has made it his mission to visit more local chambers of commerce than anyone else on the planet. He connects businesses, small and large, with lawmakers on both sides of the aisle to protect Texas’ pro-business climate. Glenn is proud to be a part of the Texas Camino Real District Export Council, American Society of Mexico, and National Immigration Forum. He also serves on the board for the U.S. Chamber of Commerce and chairs its committee of 100 (CCC100).

Glenn came to TAB after 14 years as CEO of the Arizona Chamber of Commerce & Industry — where he played a central role in major tax, education, legal and healthcare victories. He was at the forefront of the business community’s advocacy for the United States-Mexico- Canada Agreement (USMCA). Glenn is a highly regarded international issues expert and has joined governors, mayors, and the U.S. Chamber on trade missions to China, Taiwan, Mexico, Canada, Israel, and the United Kingdom. Recognizing the global race for talent to keep our economy strong, Glenn is also a recognized champion on immigration reform.

A graduate of Cornell University and Arizona State University's College of Law, Glenn is married with three daughters, all of whom exhibit a strong entrepreneurial spirit. His wife Tali is quadrilingual, and their daughters are bilingual (English and Hebrew).